The Dramatic Comedy to Debut in Charlotte and Davidson, North Carolina Theaters on Friday, May 13th

Indian Land, SC–INSP Films, a producer of family-friendly/wholesome movies, has set a release date for its next feature, Savannah Sunrise.  The film, which stars Shawnee Smith, (Becker, Anger Management, The Stand, Saw, Who’s Harry Crumb?), and  Pamela Reed (Parks and Recreation, NCIS, CSI, Criminal Minds, Kindergarten Cop, Proof of Life) will debut in selected theaters on Friday, May 13th.  The announcement was made by INSP Films VP, Gary Wheeler. 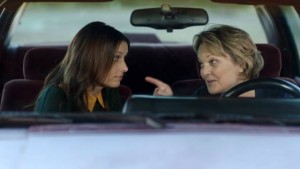 Savannah Sunrise is a dramatic comedy celebrating the often complicated relationship between a woman and her mother-in-law.  Straight-laced, type-A personality Joy Miles (Smith) is a driven, hardworking mother of two who runs a successful logistic consulting firm.  She has to take an unscheduled road trip from Louisville, Kentucky to Savannah, Georgia to drive her forgetful, yet opinionated, mother-in-law, Loraine (Reed) to her new home in a retirement community.  Loraine, who is quick to dispose of down-home wisdom, is everything her daughter-in-law is not. Although initially impatient and frustrated, Joy begins to realize her true affection for Loraine as she takes a front-seat-view of how this strong-willed yet free-spirited woman manages the emotional transition of learning to live life after losing her spouse. Despite their many differences, and with light-hearted adventures at every turn, they discover how much they respect and even need each other.

“Savannah Sunrise is a heartwarming film that will resonate with anyone who may have a complicated relationship with other family members…something many of us can relate to,” says Wheeler.  “The movie touches on the challenges of what happens when life changes, and it reminds viewers to reevaluate what is really important.  We hope the audience will walk away with a renewed sense of determination to cultivate and build on those family relationships.  As we learn in Savannah Sunrise, it is never too late to begin that dialogue.”

About INSP Films
INSP Films is a theatrical motion picture production company owned by television network INSP.  Founded in 2015, it produces films that are inspiring, heartwarming and family-friendly.